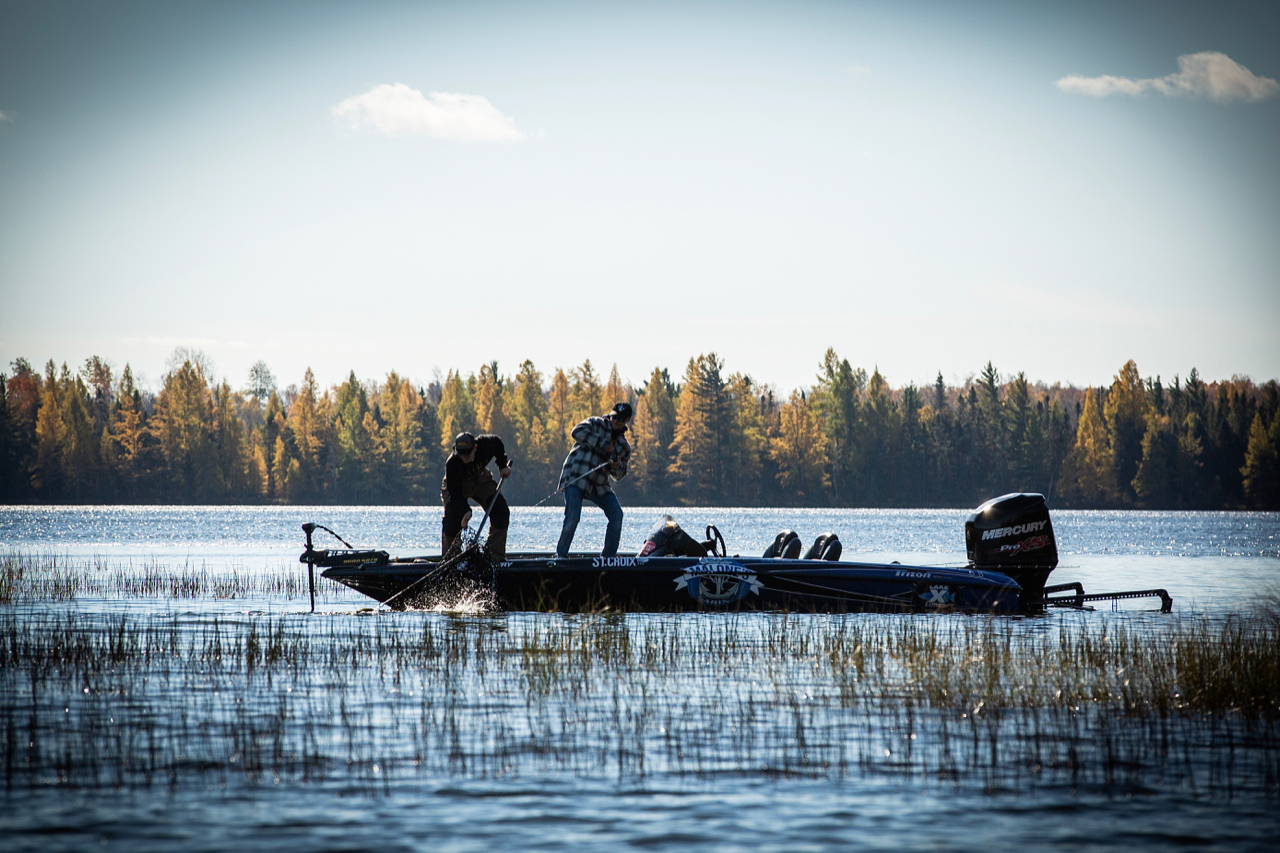 Musky anglers don’t always agree on the best ways to catch the fish of 10,000 casts. Variations in today’s lures and tackle mean there’s more choices than ever to support multiple musky techniques and presentations, any of which can decrease that 10,000 number to something a lot more reasonable. That said, at least three of the most successful musky anglers in the Upper Midwest do agree on something: the month of September is one of the best times to be on the water.

“The pre-turnover period that occurs from the last week or so of August and continues pretty much throughout September has become my favorite time of the whole musky season,” says Minocqua, Wisconsin-based musky hunter, outdoor communicator, and fishing promoter, Steve Heiting - During this time, we will see and catch many of the biggest muskies of the entire year. It generally starts when water temperatures cool to below 70 degrees, but really ramps up between 65 to about 58 degrees. After that, turnover is on the verge of happening and this particular bite is mostly over. I’ve succeeded fishing this pattern throughout Wisconsin, Minnesota and Ontario, and understand it also works just fine in southern reservoirs — just a little later in the year.” 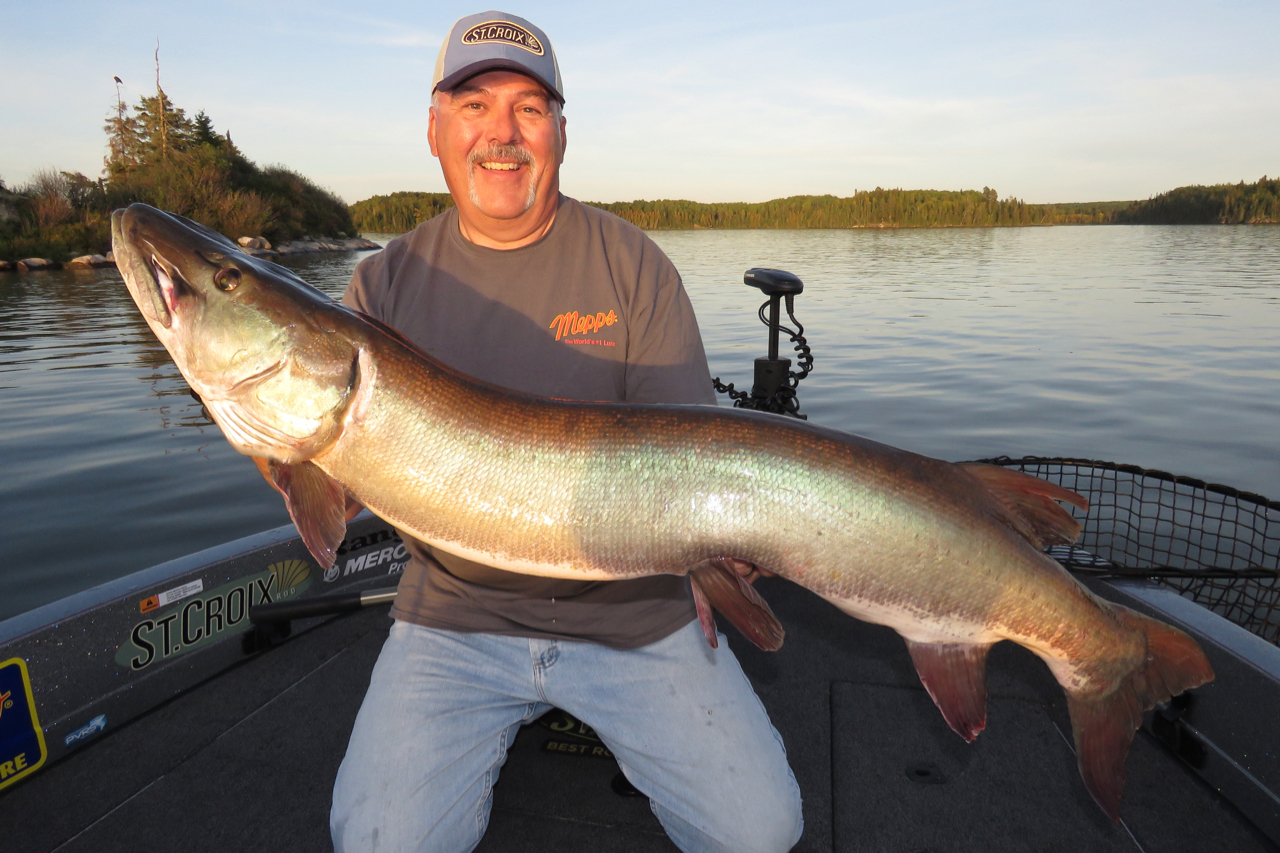 Heiting says the pattern is a musky caster’s dream because the fish — including those giants that lived in the deep lake basin all summer — move shallow, and they’re there to feed. “Muskies can be very individualistic, so they may not all move at once, but the ones that are shallow will be biting. They will use shallow sand flats, weeds that are still green, or rocks,” says Heiting, who adds that the thickest, greenest coontail and cabbage beds are among the best places to start the hunt. “Wind helps, especially on rock spots, but it isn’t necessary to trigger fish,” Heiting continues, adding that the biggest muskies will almost always use spots that have deep water nearby. “In dark water systems, I generally position my boat in six feet of water and fish shallower, and in clear water systems I may hold the boat in about 10 feet and fish shallower, but it depends on the layout of the spot.”

Heiting says it’s important to cover water to hunt active fish. “Big bucktails with double 10 or double 9 blades like those offered by Musky Mayhem Tackle, and topwaters like the Bucher TopRaider or Lake X Fat Bastard, are staples at this time,” Heiting advises. “A big minnowbait such as a 10-inch Slammer Minnow or a jerkbait like a 10-inch Suick Muskie Thriller will come into play when the muskies don’t want to chase bucktails or topwaters.”

Because Heiting is exclusively using big baits for big fish right now, almost every rod in his boat is rated heavy power, and since figure 8’s are so important, these rods are all 8’6” or longer. “Let the longer, heavy power rod do the work of casting the big baits, and it will also do a better job of taming big muskies,” he advises. “St. Croix’s Mojo Musky 8’6” heavy power, fast action model is terrific for this application, but any 8’6” or 9’ heavy power St. Croix rod will work great.” 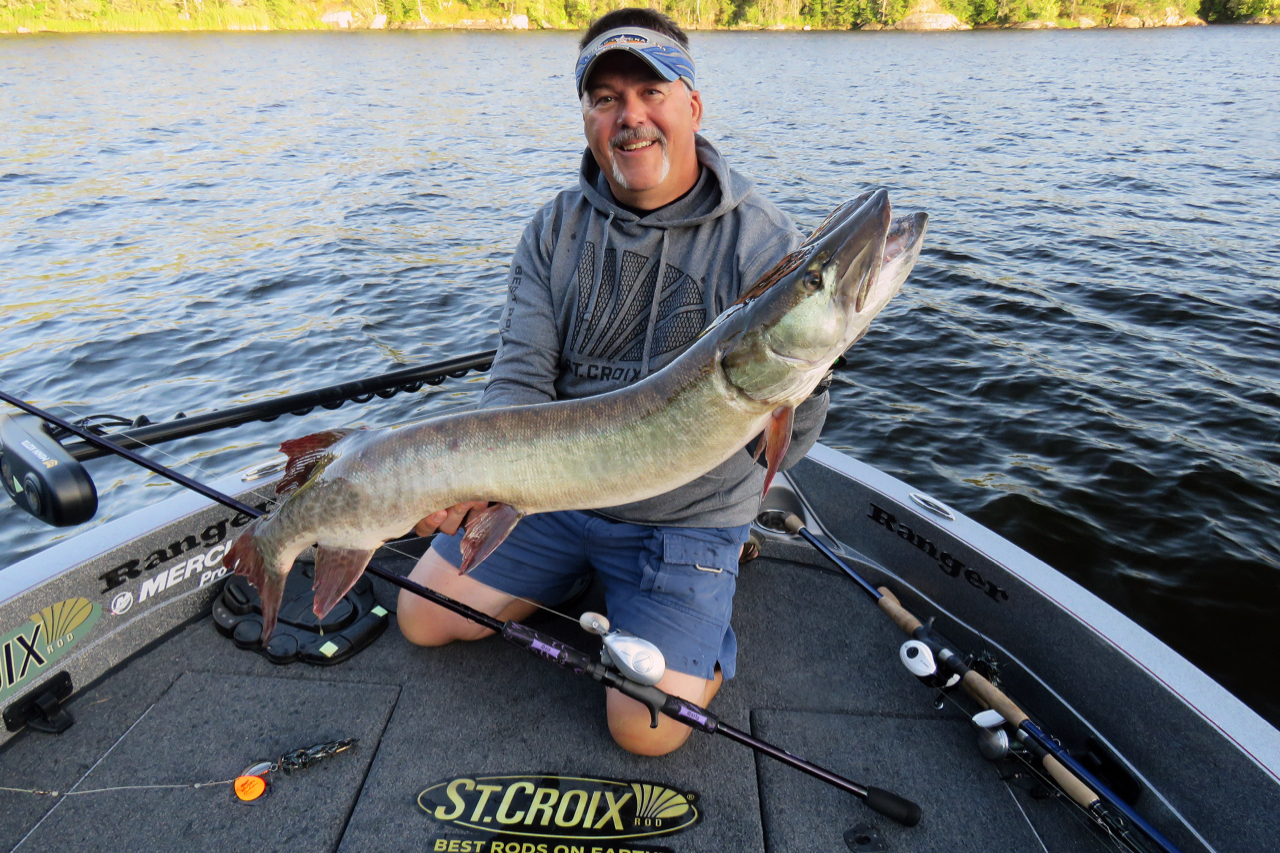 Heiting most often uses reels with a more powerful 5.3:1 retrieve ratio at this time of year. “High-speed retrieves are less important now than in summer, and a mid-range reel allows you to fish slowly or fast, depending on what the muskies want,” he says. “Load your reel with 80- or 100-pound braided line to provide insurance when fishing around heavy shallow cover or structure.”

Professional fishing guide, Rob Manthei, has been plying the fabled musky waters of Northern Wisconsin’s Vilas, Oneida, and Iron Counties his entire life. He agrees that the month of September is a magical time. Like Heiting, Manthei targets big fish in shallow weeds. “September for me is all shallow weeds, weed edges, and flats,” he says. “I pattern muskies around particular lakes that are ‘blooming hard’ prior to the fall turnover and key in on water between five and 12 feet deep. Water temps start dropping with the cooler nights, which brings fish that have been spending most of their time out deeper into the shallows.” 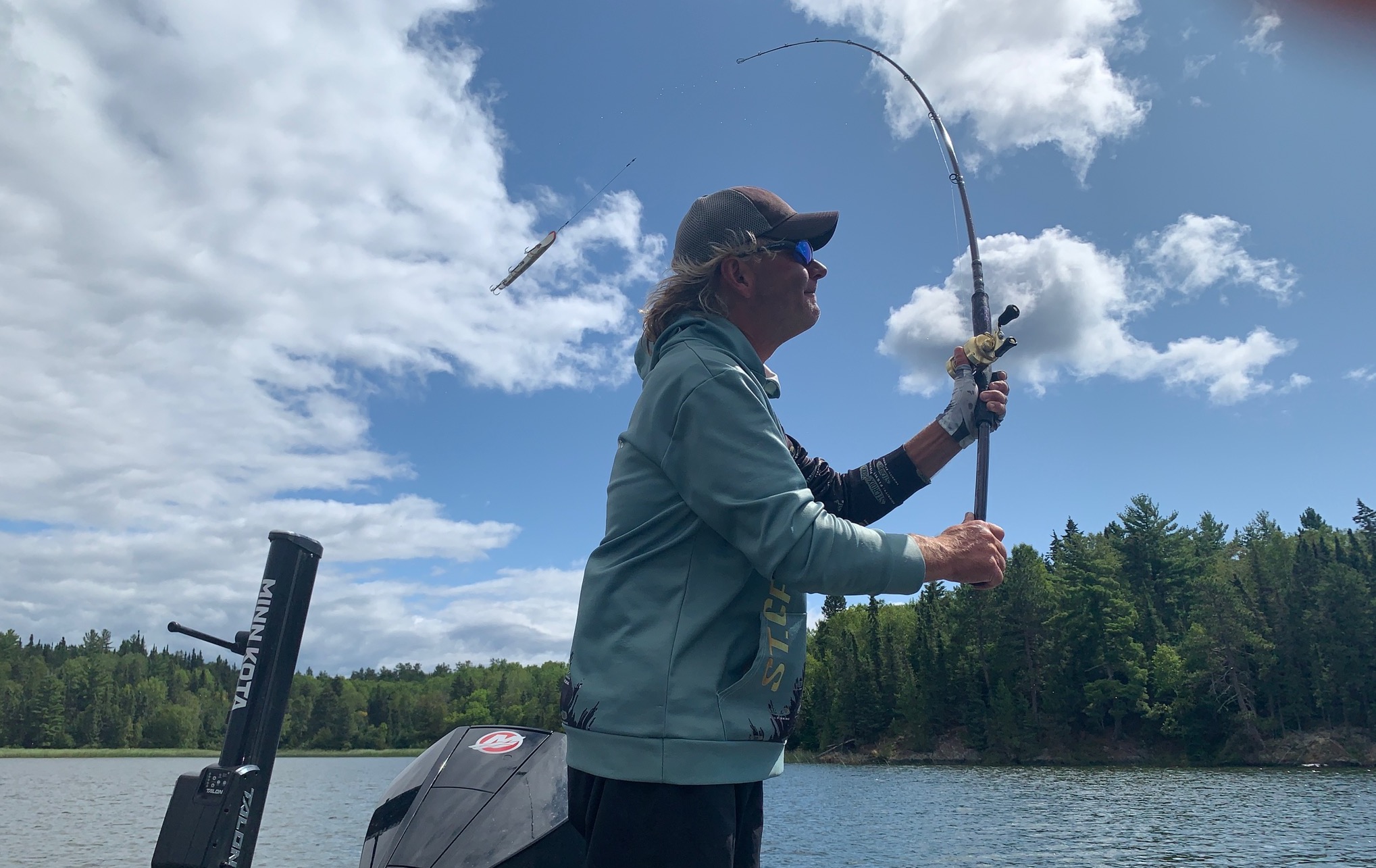 Manthei says moon phases can be especially important this month. “Underfoot, overhead, full, and new moons are special times,” he says. “I really like west or south wind directions, and dark, gloomy days are my favorite.” Manthei looks to double-bladed spinners as his go-to bait throughout much of the pre-turnover period, which he typically burns over shallow, green weeds. “Large-profile and typically dark to all black color combinations work really well. The dark colors show up best in the bloomed-up water, and 95% of strikes are within 10 feet of the boat or during figure 8’s,” continues Manthei, who opts for longer, 8’6’ to 9’6” rods for this reason. “The new Mojo Musky 9’6” medium-heavy, fast, telescopic model is a fantastic rod for all but the largest blades, and the 9’6”, 9’, and 8’6” heavy power Mojo Musky models, Legend Tournament Musky, Premier Musky, and Legend Elite Musky models are all good choices for double 9’s and 10’s. Musky Mayhem JR Double Cowgirls with double 8 blades are my favorites,” Manthei continues, “but I also hand tie a custom spinner with double fluted 9’s that I love, too. I always run 80-pound Seaguar Threadlock braid as my main line.”

Manthei says the shallow weed bite lasts until water temperatures dip to 60 or 62 degrees. “Once that happens, we pray for wind to mix the lakes and complete the turnover quickly so we can move into the next phase of fall musky fishing.”

Owner of LakeX Lures and LakeX Guide Service, John Kleczewski, of Park Falls, Wisconsin reiterates much of what Manthei and Heiting have to say about September’s shallow weed bite. “Weeds are starting to die off now, so look for the greenest ones available. When the fish slide up shallow, a Fat Bastard paired with the Mojo Musky 8’6” heavy power, fast action rod will cover water fast and call muskies out,” he says. “We are also throwing the LakeX XToad on the 9’ Premier Musky extra-heavy ‘Rubber Rod’, as well as running blades over the tops of the weeds.

Kleczewski shares Manthei’s affinity for the Mojo Musky 9’6” MHFT (telescopic) rod. “I personally like to bulge my blades over the weeds with some speed at this time of year, and this rod is perfect for 7’s, 8’s and even 9’s,” he says. “That extra length not only helps increase casting distance, but excels in executing effective, long, and deep figure 8’s.”

Whether you’re a hardcore musky hunter or a more casual angler looking to increase your chances at connecting with more or larger Esox masquinongy, all of our experts agree that right now is among the best possible times to be on the water. If your fishing time is limited, plan to hit the lake during gloomy, overcast days around the full or new moon, and gear up with the specific lures and rods necessary to fish shallow, green weeds and other shallow cover and structure. When asked about the best windows to be on the water this month, Heiting says: “Give me a still, humid, slightly-foggy morning when I can still wear shorts but need a hoodie for comfort, water temperatures around 62, and a full moon which will set in the early morning, and it won’t be long before my net smells like a musky.” 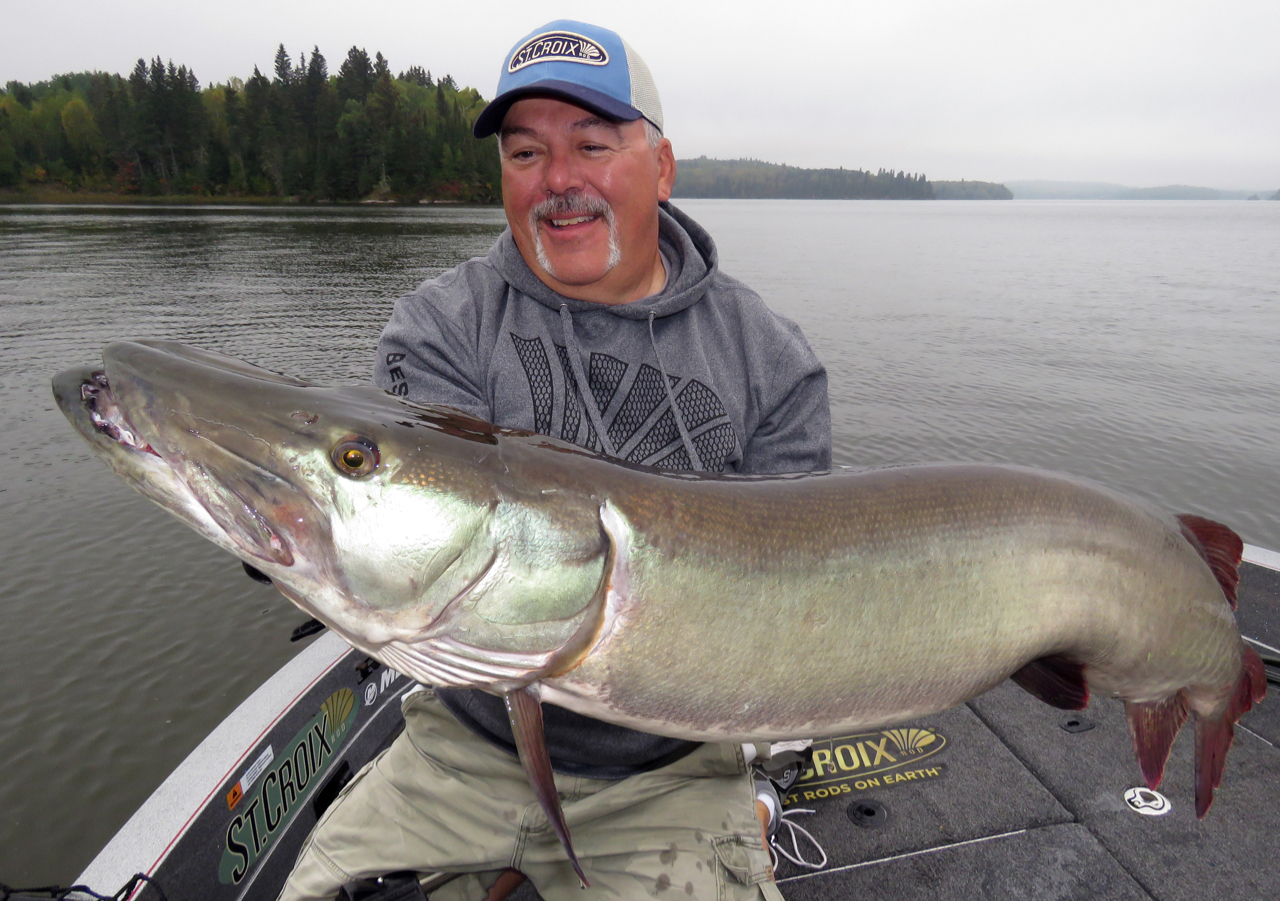 Follow the forage shallow this month and you’ll find the predators, but don’t wait: these bites typically last throughout September and into early October and end once the first, serious cold snaps drive fish to deep structure.